The 2005 Bankruptcy Abuse Prevention and Consumer Protection Act (BAPCPA) changed New York bankruptcy in some dramatic ways, particularly chapter 7. It also changed New York bankruptcy lawyers’ practices: The recently revised bankruptcy forms they complete for clients are an echo of the BAPCPA. Most of the BAPCPA went into effect in October 2005, and it was passed nearly 11 years ago. Even though it’s a bit late, because I’ve been writing in detail about the means test lately (a product of the BAPCPA), some context about its effects might be helpful.

Researchers have written much on the BAPCPA—many of them wearing out the joke about the “meanness” of the means test—but it’s safe to say that the consensus on the means test’s effects is negative. The means test was designed to prevent abusive bankruptcy filings by debtors who could otherwise afford to repay their debts in chapter 13. Whether bankruptcy abuse was common before the BAPCPA isn’t clear, but generally it wasn’t.

Although household bankruptcy filings per household had been rising since the late 1980s, the cause was mostly economic: The U.S. experienced jobless recoveries after the early 1990s recession and the dot-com bust. A 2007 study conducted by the Federal Reserve Bank of New York discussed pre-BAPCPA research that correlated bankruptcy with higher disability rates, lower insurance rates, and gambling. It included a chart illustrating the rise in filings. 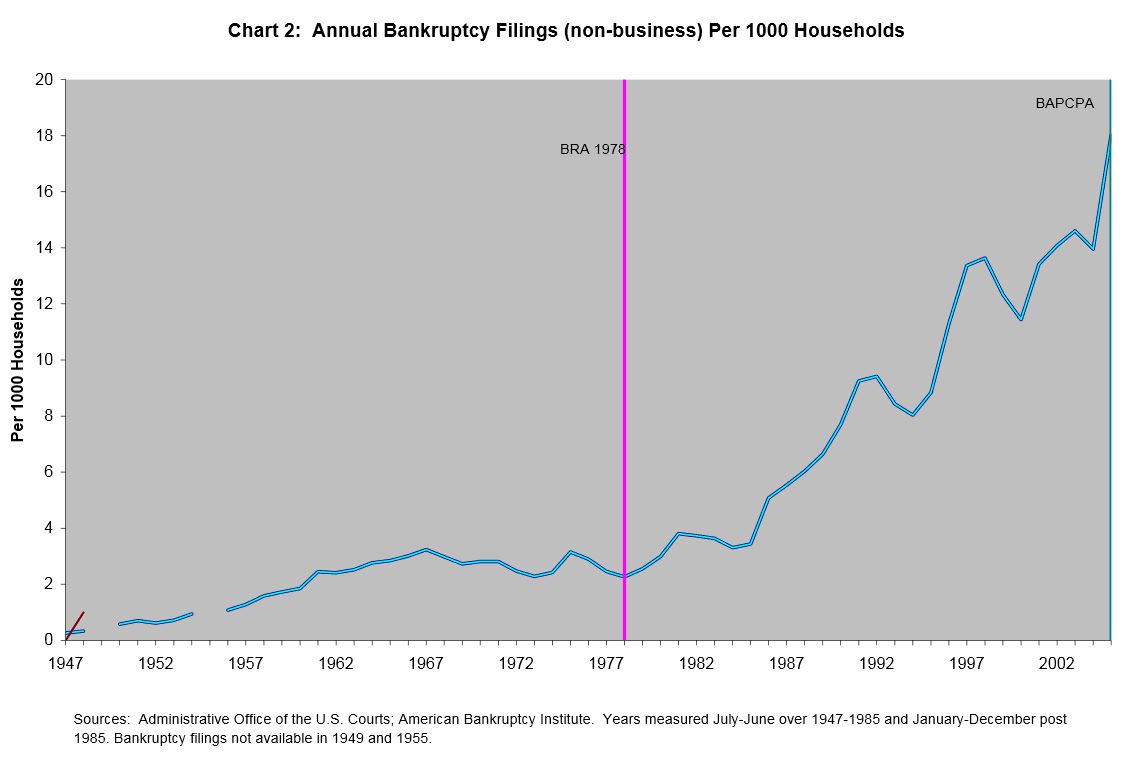 Even if “strategic” bankruptcy was going on, the chapter 7 means test didn’t do much to solve it. One 2011 article (pdf) cautioned against the means test’s reliance on states’ median family incomes because of its arbitrariness. Americans’ incomes vary quite a bit from their states’ medians because intra-state living standards differ. A rural household at median family income can probably afford a chapter 13 plan much more easily than a similar urban one.

One commentator for the American Bankruptcy Institute (pdf) offered the best defense of the means test: Nearly all debtors pass it. In its first nine years roughly 1 debtor in 206 faced an abusiveness motion, and even then 97 percent of debtors still obtained relief. An ABI webinar panel participant also pointed to a reduction in filings after the BAPCPA, according to a Bloomberg article.

Neither of these claims is convincing. The issue isn’t whether debtors fail the means test. It’s not much of a test if everyone passes it. Rather, the question is whether the means test deters the wrong debtors from filing in chapter 7 without burdening those who do. “Strategic” debtors might instead file in chapter 13 or not file at all. Meanwhile, debtors otherwise eligible for chapter 7 should encounter little difficulty filing. A more recent New York Fed paper, coauthored by one of the other ABI webinar participants (pdf), sampled longitudinal data on consumer credit information from 1999 to 2013, and it compared how households dealt with financial difficulties both before and after the BAPCPA.

The authors found that the BAPCPA corresponded to a reduction in both chapter 7 and chapter 13 bankruptcies. However, it also coincided with an increase in foreclosures and financially distressed households with below-median-family incomes. Households substituted bankruptcy with foreclosure and insolvency without an increase in debtors who were current on their debts. Essentially, the BAPCPA made it harder for people who need the bankruptcy system instead of preventing people who could repay their debts from filing. The primary factor driving poor people away from bankruptcy was increased filing costs, specifically a 38 percent rise in attorney’s fees for chapter 7 cases.

The authors noted that creditors have benefited by the BAPCPA because it’s easier to recover from insolvent debtors than those who’ve obtained bankruptcy discharges.

After a decade of means-testing chapter 7, it’s indisputable that debtors are worse off. Realistically, the only way the means test could be working is by punishing people who borrow too much and hoping that other debtors will take the lesson. However, bankruptcy isn’t a morality play, and there are better ways of discouraging irresponsible borrowing. If you are finding difficulties paying your bills, it’s still better to talk to an experienced New York bankruptcy lawyer than fall into insolvency.

For answers to more questions about bankruptcy, the automatic stay, effective strategies for dealing with foreclosure, and protecting your assets in bankruptcy please feel free to contact experienced bankruptcy trustee actions Bruce Weiner for a free initial consultation.

What Is a ‘Pot Plan’ in Chapter 13 New York Bankruptcy?

The answer has to do with paying money into a pot, not other kinds of pots. There is surprising flexibility in how debtors can structure their repayment plans in chapter 13 New York bankruptcy, especially as they apply to unsecured creditors. The reason for this flexibility isn’t simply to give debtors more options; rather, it’s

get direction
Facebook Google-plus Twitter Linkedin
Rosenberg, Musso & Weiner, LLP, assists out clients with debt relief under the Bankruptcy Code.
The choice of a lawyer is an important decision and should not be based solely on advertisements.
Scroll to Top