The Federal Reserve Bank of New York occasionally shows interest in bankruptcy filings, and now it’s updating its “Quarterly Report on Household Debt and Credit” to include bankruptcy filings by age bracket. The quarterly report is a very important source of information on household debt, relying on samples taken from anonymized Equifax credit reports. Until now, the report contained new bankruptcy filings, but the Fed’s analysts are expanding their research into the topic. Adding the new information is beneficial because it can help debtors and New York bankruptcy lawyers understand trends in bankruptcy by age ranges.

The reason the N.Y. Fed believed it worthwhile to start tracking bankruptcies is that the media has been running articles on elderly Americans in bankruptcy. Okay, well, the researchers cited only one article that appeared in The New York Times last August, which I discussed in my post, “How to Avoid Bankruptcy as an Elderly American.” Here are a few of the N.Y. Fed’s findings, shared in a blog post.

Chiefly, since 1999 the number of Americans aged 65 and up who file bankruptcy has not swung substantially upward, contrary to the Times characterization. Although, the Times article claimed the “upswing” began in 1991, which is before the report’s dataset. Nevertheless, the Times, as it tends to do, centered its reporting on a few anecdotes and reasoned from there. For the most part the number of people aged 60 and up who file bankruptcy in a given quarter fluctuate between 60,000 and 140,000. Right now, it’s as low as it was before the Bankruptcy Abuse Prevention and Consumer Protection Act (BAPCPA) went into effect in 2006. It’s unfortunate the N.Y. Fed does not have information going back to the 1990s.

Among the researchers’ other findings are that the majority of bankruptcy cases are filed by people in the 30-49 age range, and filings by the youngest borrowers fell precipitously after the BAPCPA went into effect.

Here’s the N.Y. Fed’s most recent chart of bankruptcy filings by age. 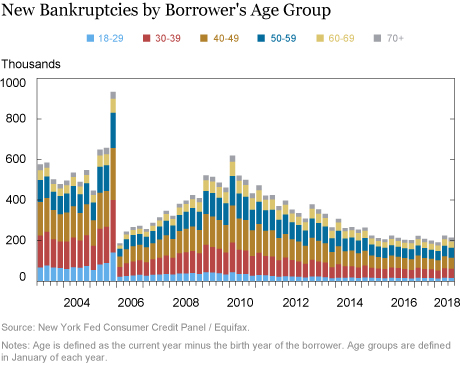 If you are a New Yorker who is struggling with financial problems, then this information should help give you a sense of what bankruptcy is like for people your age. It shouldn’t, however, convince you that your problems don’t exist or that you shouldn’t deal with them. Your best course of action is consulting with an experienced New York bankruptcy lawyer to assess your options.

For answers to more questions about bankruptcy, the automatic stay, effective strategies for dealing with foreclosure, and protecting your assets in bankruptcy please feel free to contact experienced Brooklyn bankruptcy attorney Bruce Weiner for a free initial consultation.