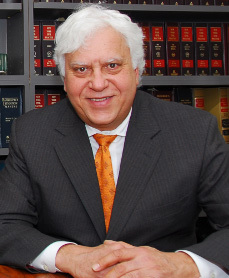 Bankruptcy Attorney in Brooklyn helps you get a fresh start.

Robert Musso is a Bankruptcy Trustee and attorney. He has been practicing bankruptcy law since he was admitted to the bar in 1977. He has been a member of the trustee panel for the US Bankruptcy Court for the Eastern District for 30 years. Therefore, Mr. Musso is trusted by the court to administer millions of dollars of assets in cases involving individuals and companies, ranging from manufacturing to bakeries. In addition to liquidating and recovering assets such as cash, business inventory and equipment, Mr. Musso has also recovered and liquidated residential and commercial real estate assets.

Mr. Robert Musso received an AV rating from Martindale Hubbell, which is their highest rating for attorneys.

Rosenberg, Musso & Weiner’s debtor clients benefit from his Bankruptcy Trustee experience, as he brings a unique understanding of the issues from the other side of the table. He has in depth knowledge and experience of fraudulent transfers and bankruptcy litigation cases, as well as how to identify asset cases. Robert Musso knows that there are times when it is not advantageous for a client to file for bankruptcy. Knowing when to file and when not to, helps debtor clients make the decision that’s best for them.

Mr. Musso has an excellent working relationship with other bankruptcy trustees, and is well respected by bankruptcy judges, and other court personnel.

An understanding, patient man, Robert Musso is also known for his responsiveness to clients and their needs.

Mr. Musso is married and has 3 children.

Here are some highlights of the thousands of bankruptcy & trustee cases that Robert Musso has successfully defended:

Downtown Athletic Club: Represented the Creditor’s Committee in a Chapter 11 case which resulted in a successful reorganization of the company which was the former home of the Heisman Trophy.

Musso has aggressively tracked down assets hidden in a foreign country. He flew to Greece to testify in court to recover assets in a case which involved liquidation of real estate.

Mr. Musso was recently featured on ABC Eyewitness News discussing job loss, financial difficulties and bankruptcy entitled “What to do if you lose your job“.

10% of Practice Devoted to Litigation